Why virtual reality could be the future of viewing photographs

Years from now, we might view today’s process of viewing photographs — by flipping through individual still photos that were printed out at the corner drugstore, or scrolling through 2D digital photo collections online — as remarkably quaint. Photos are coming to life in new ways, thanks to advances in virtual reality enabling more immersive viewing experiences. Instead of just viewing an image, you immerse yourself in the image.

Photo-sharing community Flickr, for example, is working with Oculus on a VR experience for photos that could bring virtual reality into the consumer mainstream. At the XOXO Festival in Portland this past weekend, Flickr demoed a way for users to view 360-degree panorama photos using the Oculus DK2, hooked up to a PC. Once the Oculus headset is on, a user is able to explore slideshows of photos by staring at little blue-and-pink Flickr balls for a second seconds, literally triggering the next photo to appear with his or her eyes.

According to Bertrand Fan, the engineer and project lead for the Flickr VR experience, the trial might be expanded to the Samsung Gear VR and other VR devices, in addition to the Oculus Rift, before launching to the public in 2016. Moreover, as he told Engadget, Flickr might eventually help to develop a gesture-based user interface modeled on the one in “Minority Report,” enabling users to quickly browse libraries of images and organize photos using their hands. 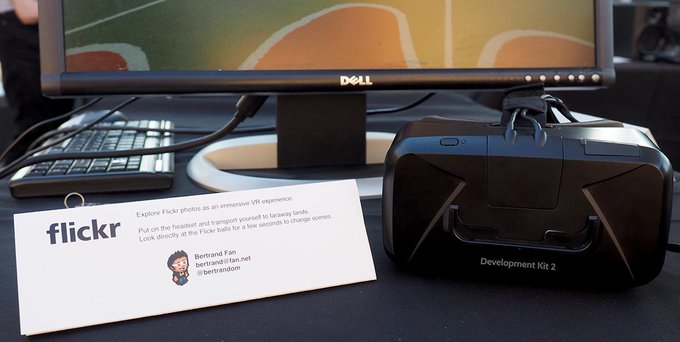 Of course, the obvious question that arises is whether people are really going to be strapping on VR headsets in order to view photos when the Flickr VR experience eventually goes live sometime in early 2016. While gaming enthusiasts lining up for the Oculus Rift may embrace the technology, plunking down cash for a VR device could be a huge question mark for most people, since let’s face it, there aren’t so many times that we send and receive 360-degree panorama photos.

To create momentum around VR viewing experiences for photos, Flickr has plans to develop a new page specifically highlighting 360-degree panorama photos, as well as plans to create a new “sharing” button for these photos when they appear online. Similar to the way that you’d click a button to share a link via Twitter or Facebook, you’d click a link to activate a VR viewing experience. (Just make sure you have your trusty Oculus VR device nearby)

If you think about it, even something basic like the GIF (or the cinemagraph) hints at a world where we want our photos to do more than just “sit on the page” as static images — we want them to move, to tell little stories that can be absorbed in a few seconds. That’s the appeal of using virtual reality for photography — it creates a fundamentally new type of viewing experience where users can pan around a scene to see more of the context that led to the original still photo. It’s a new way of telling stories.

Consider that Getty Images, one of the biggest names in the visual communication space, is now getting into the business of VR stock photos. In mid-June, the company launched a 360-degree viewing app for the Oculus platform called “360-Degree View.” The idea is that, instead of just viewing a stock image of, say, the Cannes Film Festival or the 2014 FIFA World Cup, you’d be able to purchase a stock VR image of the event, giving you a unique 360-degree view of the event and even the ability to see photos in time-lapse sequence.

It’s easy to see one obvious use case for VR photography — travel photography. If you check out Flickr’s 360-degree panorama photos, many of them are based around the theme of travel. Other companies are taking notice. New York-based YouVisit, which bills itself as “the global leader in virtual tours and virtual reality,” makes it possible to view photos of classic urban landmarks or breathtaking vacation destinations, everything from New York restaurants to Carnival cruise ships. YouVisit has also partnered with educational institutions, real estate companies, live music festivals and event planners to provide virtual 360-degree tours.

Another use case for VR photography could be news journalism. ABC News, in collaboration with the virtual reality company Jaunt VR, recently launched its VR news experience known as ABC News VR. The first test case was a 360-degree VR report on Syria, similar to the one (“The Battle for Northern Syria”) that appeared earlier by the Syrian SMART News Agency. ABC News created the video by stitching together still photos from multiple cameras to create a 360-degree panorama view of Syria’s capital, Damascus.

You can watch ABC News VR video on your desktop in much the same way you’d watch a YouTube video – or you can slide your smartphone into a Google Cardboard viewer and have the option to have a full VR experience – you can scroll to different parts of the video to change your perspective. ABC News saw it as a compelling way to present viewers with the destruction in Syria – it’s literally everywhere around you, wherever you look.

Not surprisingly, some of Silicon Valley’s biggest tech players are now getting into the game of using VR for photos and videos. Facebook – which acquired Oculus for $2 billion in 2014 – is reportedly working on a 360-degree video experience for mobile devices that works by tilting your phone. And Apple is reportedly making moves to ramp up its use of VR for entertainment experiences, including the filing of a patent for a VR viewing device.

Maybe photography becomes the killer app for VR, transforming it into a mainstream experience that goes far beyond just gaming and convinces people to buy the latest and greatest VR viewing device. Once these viewing devices (whether from Oculus or another company) gain critical mass in the mainstream consumer market, VR may then eventually be able to fulfill Facebook chief executive Mark Zuckerberg’s vision for the future of virtual reality, in which it transforms everything from entertainment to healthcare.